Tenzin Choedrak was imprisoned by Chinese authorities in 2008 after being accused of acting as a ringleader of the March 2008 protests in Lhasa, Tibet. He was sentenced to 15 years. 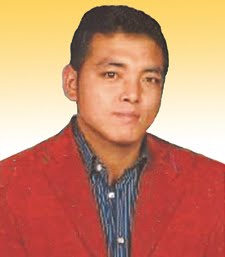 Born in Gyabum Gang village (northern part of Lhasa) he left for India in 1990 and studied in Upper TCV School in Dharamsala. In 2005 he returned to Lhasa where he joined a European NGO affiliated to the Red Cross and worked on environmental protection projects in Lhasa and Shigatse.

He suffered from severe beatings and torture. Early in November, as his condition deteriorated, prison authorities took him to three different hospitals for treatment. Quoting a local eyewitness, the source said, “Tenzin Choedrak was brought to one of the hospitals with his hands and legs heavily shackled. He was almost unrecognizable.” After the doctors gave up hope of saving him, he was released to his family. Only two days later, he died on 5 December 2014 at the age of 34 after being imprisoned for almost six years.

Today, there are over 3000 Tibetans imprisoned in Tibet for political reasons and without having committed any crimes. Freedom of speech is a basic human right. However Tibetans are detained by the Chinese authorities simply for expressing their thoughts and feelings. Tenzin Choedrak’s tragic yet inspiring story stands for a whole new generation of young Tibetans who courageously stand up for their rights and fight against Chinese oppression.

We want to remember these stories and honour brave people like him. We will give a scholarship this year to a Tibetan student in need on his behalf. Through this initiative his spirit shall pass on to the next generation. On 7 and 8 February we collected donations in Basel during His Holiness the Dalai Lama's visit. We raised CHF 1'342.65 and Euro 42.

We are happy to announce that the „Tenzin Choedrak Scholarship" will be given to a 20-year-old Tibetan male student in Tibet. He is currently completing his master’s degree at a university and comes from a poor nomadic family. In his free time, he’s actively engaged in preserving Tibetan language and gives workshops to Tibetan children as a volunteer.
Thanks to a generous donor the original amount of CHF 1'342.65 and Euro 42 could be raised to CHF 1’500. The student will receive the whole amount as a scholarship in the coming month.
We hope that you will understand that there’s no possibility for us - at the moment - to give more informations since this student lives inside Tibet and is under Chinese control.
The legacy of Tenzin Choedrak will live on with this courageous and smart student. We want to say THANK YOU to all the donors for making this possible.